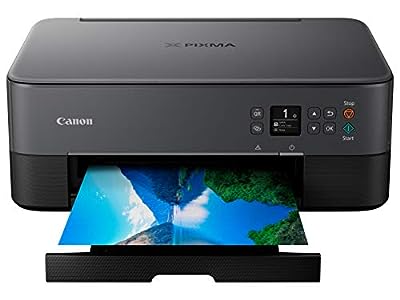 Please choose from the options above to see price and availability.

Product Information (more info)
CERTAIN CONTENT THAT APPEARS ON THIS SITE COMES FROM AMAZON SERVICES LLC. THIS CONTENT IS PROVIDED 'AS IS' AND IS SUBJECT TO CHANGE OR REMOVAL AT ANY TIME.

COMPACT TO FIT YOUR SPACE

The TS6420 features a compact and stylish design that matches your space. With Front & Rear Paper Feeding you can simultaneously hold plain paper in the front cassette and extend the rear tray when you want to print on photo paper or other paper types.

Get started with Easy Setup for smartphone and computer. Printing/copying/scanning is a breeze with a clear 1.44” OLED Display and built-in Auto Duplex so you can use less paper when printing large documents.

PRINT FROM YOUR MOBILE DEVICES

Print from your smartphone or tablet quickly and easily using Apple AirPrint(R)[4], Mopria(R) Print Service[5], or the Canon PRINT App[3].

Download the Easy-PhotoPrint Editor app[6] or Canon Creative Park App[22] for more printing options and fun projects like posters, calendars, and other crafts. Push your creativity even further with Canon square, Magnetic, and Restickable photo papers!

Introducing the PIXMA TS6420, a compact and sleek All-in-One printer built for your busy lifestyle. It’s easy to setup and simple
to use — featuring a 1.44” OLED window which delivers clear, easy to read status messages as well as Front & Rear Paper feeding
so you can print on a variety of paper types. The TS6420 can handle your everyday tasks with ease from scanning an old handwritten
recipe to printing crafts from the Canon Creative Park AppX. Whether printing from your computer or wirelesslyx from your
smartphone, the TS6420 is an effortless All-In-One Printer that fits your everyday printing needs.

1. Wireless printing and scanning requires a working network with wireless 802.11b/g/n capability, operating at 2.4GHz or 5.0GHz. Wireless performance may vary based on terrain and distance between the printer and wireless network clients.

2. Requires a smart device with the Canon PRINT Inkjet/SELPHY app installed and connected to the desired active wireless network to complete cableless setup.

3. Requires an Internet connection and the Canon PRINT Inkjet/SELPHY app, available for free on the App Store and at Google Play. Compatible with iPad, iPhone, and iPod touch devices running iOS 12.0 or later, and AndroidTM mobile devices running Android 4.4 or later. Your device must be connected to the same working network with wireless 802.11 b/g/n capability as your printer. Requires a compatible social media account and is subject to that social media account’s Terms of Service. Certain exceptions may apply.

8. This feature requires the printer to be connected with permission to the Canon Inkjet Cloud Printing Center (CICPC), an Internet connection, active 3rd party (social network or Cloud Storage) account, and a compatible Canon inkjet printer. Certain exceptions may apply.

11. Resolution may vary based on printer driver setting. Color ink droplets can be placed with a horizontal pitch of 1/4800 inch at minimum.

12. Optical resolution is a measure of maximum hardware sampling resolution, based on ISO 14473 standard.13. Based on accelerated testing by Canon in dark storage under controlled temperature, humidity and gas conditions, simulating storage in an album with plastic sleeves. Canon cannot confirm the longevity of prints; results may vary depending on printed image, drying time, display/storage conditions, and environmental factors. See www.usa.canon.com/chromalife100 for additional details.

15. Compatible with iPad, iPhone or iPod touch devices running iOS 9.0 or later, or Android mobile devices running Android 5.1 or later, with Bluetooth hardware enabled. For full print functionality Canon PRINT Inkjet/SELPHY app must be open and paired to use Bluetooth functions, available for free on the App Store and at Google Play. Bluetooth communication and functionality cannot be confirmed on all Android devices.

16. Canon Print Service is a print plug-in for Android smart devices, which enables printing from Android v4.4 - v5.0 devices to many Canon printers via a Wi-Fi network. The plug-in does not work as a standalone app. Available for free at Google Play.

17. Requires an active smart assistant account linked and accompanying app enabled, the smart device and printer to be actively connected with permission to the Canon Inkjet Cloud Printing Center, and the required action(s), skill(s), or applet(s) available/enabled to the compatible printer. Voice commands can not be displayed as text on Amazon smart devices with screens.

20. Some functions may not be available with these Operating Systems. Please refer to the manual or website for details.